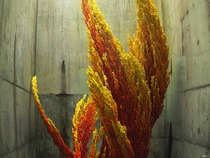 There are some videos online on Youtube that were recorded during Libre Graphics Meeting from May 2nd-5th in Vienna featuring different in-depht topics on GIMP.

Øyvind Kolås and Michael Natterer talk about the goat-invasion branch in detail (note that this branch has meanwhile become master in GIMP 2.9). They show high bit depth features directly in GIMP as well as other cool stuff that will be possible in GIMP 2.10. The port of the GIMP core to GEGL also provided some effects stuff they didn’t expect. I.e. it is possible to use many color operations on indexed images. In the end there is a short Q&A session! Very interesing (high level) talk that maybe not understand by basic GIMP users.

Victor Oliveira: Implementing OpenCL support in GEGL and GIMP demonstrated the basic implementation of OpenCL in GIMP that enables hardware acceleration in future GIMP versions. Although the code is also available in GIMP 2.8 it will most likely be enabled in GIMP 2.10 by default. OpenCL enables GIMP to parralelize many GEGL operations. Victor also shows performance increase on some filters that have already been ported to GEGL and make use of hardware accelerated rendering.

Peter Sikking is GIMP User Interface specialist. He also attended LGM and talks together with Kate Price on the current problems of text tool. They also discuss the feature that text being aligned to paths is currently not very user friendly. However the talk is sometimes bit hard to understand because the slides of the presentation are not visisble.

Something else pretty crazy stuff concerning GIMP I’ve seen the first time is live sound generation. Amir Hassan presented this at LGM using SoundFumble a program that generates sound based on an image that can be edited in GIMP while the sound output is adjusted live. Crazy and impressive! If you watch it, my advice is to turn your sound volume down ;-)

Lyle member for over 9 years

91 comments
over 9 years ago

The sound plugin is annoying yet cool. What would be really cool is to convert and MP3 to image that can then be played by this plugin; Oh the possibilities. :)