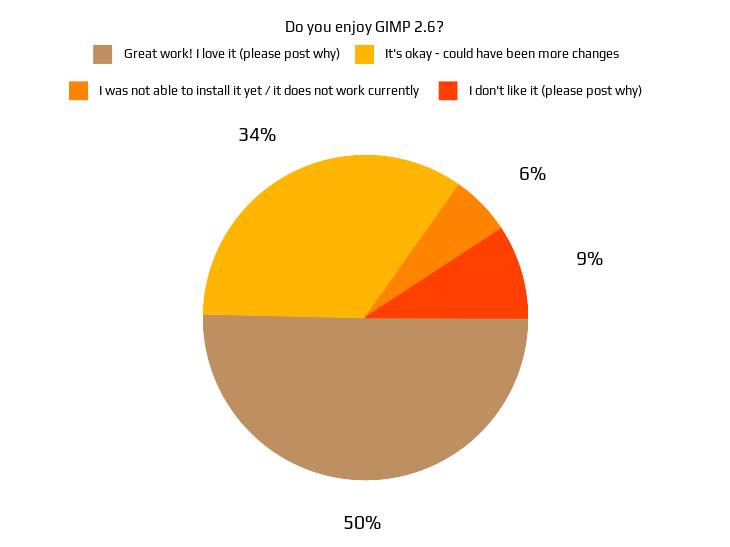 Tobyn
about 13 years ago

I love GIMP, and i just upgraded from an early 2. to 2.6. my only quips at the moment are the the lack of minimizing the other windows, and free select tool.

could it be possible to toggle between either the older freehand selection and to the anchor points it has now? while i like the ability to create polygon-selections, i also enjoyed just really quick freeforms with drag-and-release as opposed to having to tap to finish, and when i tap out of the frame it starts a new one rather than just goes away which was convenient, given that some of us don't have all our fingers for key commands.

THANK GOD THAT THEY FINALLY MADE IT ONE WINDOW.

For 10 years, I've been downloading forks or wrappers that have done this. This had to be the absolute dumbest thing I've ever seen in an open source app, and they finally fixed it. My god, open source might actually have a chance.

I enjoy using Gimp, it works great. The only thing I would like more about it is if you can get it to read RAW files. I use it to work on J PEG files but my new camera can save pictures in J PEG or RAW and RAW offers a lot more possibilities. Thanks for the great work on this program.

I vote "I like it" because the UI is much better than of PhotoShop and I really like the fact that saving files is "extension smart", all I need is to type the extension... I see a lot of people are complaining about not being able to minimize the toolbar. Personally, the fact that toolbar and the layers are different windows always would throw me off. I guess I'll try to get used to using Ctrl+B Ctrl+L shortcuts. What I don't like about the new version is that the "main window", where you would normally see the image doesn't close when you close the image. Makes it a PITA when you're trying to touch up a few images, especially when layers and toolbox are separate windows. What I really am dying to see in new versions of gimp is some kind of layer grouping, i.e. so I could group few layers together, move them around and leave them as is. Right now I either have to merge them, preventing future editing, or mess around with "linking" and unlinking after move. Other than that, I am thankful that we have Gimp in Open Source arcenal. Thanks!

As with alot of other, the damn toolbar not being able to minimize drives me crazy! It gets in the way ALL THE TIME!

The major issue I have with the 2.6 series is the new downscaling code. And the fact that it seems to oversharpen things when scaling either layers or the entire image in a way that's quite noticeable when scaling lineart-like things (i.e. a webcomic). Since I need said scaling a lot at times, 2.6 is a bit unusable for me until they either revert to 2.4's downscaling code or use GEGL for it (which I only HOPE does the job right).

I did pick up from the mailing lists that they ARE aware that the current code is, in their own words, broken, so I'm at least holding out hope that 2.8 or a later 2.6 will have something better. I do kind of like some of the other 2.6 improvements, but the downscaling issue makes it a non-starter for me.

I do not like the issue with the toolbox not minimising. I like the preview associated with the desaturation window. I may reinstall 2.4 until 2.8 comes out. Keep up the good work!

2.6 is driving me crazy with the minimize thing and no menu on top of the tool bar! I want to reinstall 2.4! I vote "I dont like it!!"

I mostly use the standard shortcuts to bring up the toolbox (ctrl+b) and the layers (ctrl+l). maybe that helps a bit ;)

3 comments
over 13 years ago

Devvv, I tried using the tab-key. Better. But it works only when the main window is active. I keep forgetting this and the tab scrolls through the toolbox. And otherwise, when I need to scroll, if the toolbox is not active, it just disappears.
Do you know whether I could create a special shortcut instead?

The window handling on Windows Vista is completely broken in 2.6.2. Images are randomly moved to the front when another image is clicked to focus it. Then I have to click it again to bring it to the front.
Saving a jpg is also horrible. The saving dialog is always on the top, so I have to move it out of the way to see the preview image. But then the original image pops up again and I have to move this away, because it's always in front of the preview image... ARRRGHH!!
Also dragging images into Gimp to open them doesn't work anymore, as there is no empty Gimp window anymore after opening the first image and dragging images into another picture adds a new layer to it instead of opening it as a new image.
The only reason, why I don't go back to 2.4 is the great improvement on the Free Select tool, which I need very often (now it's actually useable for me).

2 comments
over 13 years ago

As a new Mac user I went through a lot of (and that amazed me actually) little graphic software programs in order to just do some simple things. I had PaintShop Pro on Windows, used it for years and loved it but it is not available on Mac, Photoshop is just WAY to expensive for what I need but GIMP voila, thanks heavens is perfect.

3 comments
over 13 years ago

Poor toolbox! Now I am considering to return to GIMP 2.5. because of it. I use Windowblinds; I never had had any problems with its floating panel. I could always roll it up, send it to tray, or just minimize it. Now it is so independent, it cannot be skinned anymore and it IS getting on my way all the time. And this is plainly ANNOYING. Anyway, GIMP is the greatest project and I really love it!

you can just use the tab-key to hide/unhide the toolboxes at once ;)

I wish that the new version didn't make it so that the toolboxes are always on top. It gets in the way of the image that I'm editing a lot and I keep having to move them around. There needs to be some easy way to hide/minimize them and then bring them back up.

Otherwise I like it. A solid image editing experience as always.

Gimp 2.6.1 it's great, I like the revamped lasso tool (free select), the brush dynamics, the enhancements to the text tool, new user interface. Great work guys!!

gimp 2.6.1 help just doesn't work at all. I don't have gnome, so I want the firefox to view the local help files. It works on gimp 2.4.x, but the new rewrite of the help sytem broke it badly. I hope 2.6.2 will make it work again.