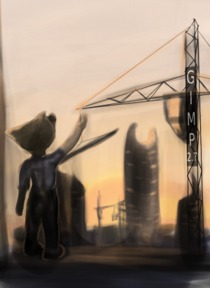 The maybe last development release in the 2.7 series of GIMP has just been made available for testing purpose.

You can download the source code in the Downloads section which links to the official servers.

GIMP 2.7.4 potentially is the last testing version of GIMP before the upcoming 2.8 release. So if you want to see all the new stuff have a look at it. Its awesome! Tablets are working again, the PSD paths now import and there is a PDB interface for paint dynamics in libgimp. Of course there are many more changes!

Binary versions are not yet available at the moment for the newly released 2.7.4 snapshot. For Windows users www.partha.com will probably have a version up soon. He will name it 2.7.5 then!

Here’s the list of changes that have been made since 2.7.3, taken from the offcial NEWS file:

- Add a close button to image tabs in single-window mode
- Improve the transform tools’ undo strings to be more descriptive
- Render the layer’s “eye” icon in inconsistent state if the layer is
visible, but one of its parents isn’t
- Add proper stacking for canvas items, so things don’t hide each other
- Make sure single-window-mode and multi-window-mode are always saved
consistently in sessionrc

- Fix “render_image_tile_fault: assertion `tile[ 4 ] != NULL’ failed”
warnings that occurred for some image sizes
- Fix attachment of the floating selection when the gegl projection
is enabled
- Replace heal algorithm with a new one by Jean-Yves Couleaud that
works much better
- Make resource sub-folders show up in UI as tags, allowing users
to easily locate resource collections they may have installed
- Fix graphics tablet canvas interaction by moving from
gdk_pointer_grab() to gtk_grab_add() for most grabs
- Stop using motion hints, they are a concept from the dark ages

- Lots and lots of undeprecations

- Make git-version.h generation work in shallow git clones
- Modernize use of autotools a bit, maintainer-mode and pdbgen
are now enabled by default

January is pretty sure :) no further delays. I've heard that recently from the developers in the offcial chat.

Has anyone heard of an official release date?

For now I rely on the schedule (http://tasktaste.com/projects/Enselic/gimp-2-8) that was released by Martin Nordholt: http://www.chromecode.com/2011/04/gimp-28-schedule-on-tasktastecom.html

5 comments
over 10 years ago

You can switch to the default theme using the preference tab, but sure the theme still looks like windows 95, unlike the official release.

Will you guys also host a windows (64bit) version soon? Partha only has unofficial and ugly/weird dark theme.

Thank you for emphasizing the "Tablets are working" part.. :)