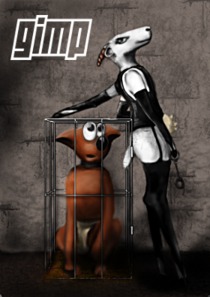 Finally there is light at the end of the GIMP development tunnel for 2.8! As we’ve heard there shall be one last development version (2.7.4) very soon – also GIMP 2.8 will follow on this pretty quickly. There is only one (rather big) bug that that concerns the text tool.

The last weeks in the development of GIMP were affected by small to medium bugfixes and further improvements, there has also been work on the user interface. For instance, there is a striked through eye now shown on layers which are inside a layer group that has been made invisible. The more or less important feature to make masking available on layer groups has been pushed back to 2.10 or GIMP 3 to not further delay the release of GIMP 2.8 which is already pretty late.

Also there is a string freeze already in affect for 2.8 now which means that there will be no additional strings that need to be translated.

After 2.7.4 (will be released before x-mas hopefully ;)) there are has to be decided which the official splash screen will be. And of course there need to be official release notes, news etc that have to be written.

When will GIMP 2.8 be released?

GIMP 2.8 will maybe be released around January 25th 2012. We consider the date pretty sure – at least the release will be somewhen around this date which means Jan/Feb. So we expect GIMP 2.8 release the public somewhen in this time.

New comments are disabled because of spam.

tobias
over 10 years ago

Windows Tablet support will be in the Gimp 2.8!

The Problem was, that Gimp switched to a newer version of GTK. (GTK is the under laying toolkit.) And GTK lost the Tablet support for Windows, because of an bug.
The Gimp team had now one with Windows tablet knowledge, so they that, that Gimp will have no tablet support.
But then a MyPaint developer (MyPaint uses GTK, too.) fixed the bug for the MyPaint 1.0 release. And Gimp can now benefit from this.

Hope they got an eye on this bug:
https://bugzilla.gnome.org/show_bug.cgi?id=633759
It has made me unable to use gimp for over one year...

AFAIK the release cycles are planned to be much mre shorthanded after 2.8. That means maybe a few months for 2.10 and maybe another year until GIMP 3 will rech the public. Of course there will be development version, so the wait is a little shorter if you use these versions ;)

when do you expect gimp 3 ?

Good to know the developers are pretty confident about the next stable release of Gimp-2.8.

Everything works, pressure, tilt... hmmm maybe you forgot to enable them in preferences?

Go to Edit > Input Devices, and on tablet devices change Mode from Disabled to Screen.

@photocomix This is for windows, not linux.. I have read somewhere on GIMP site that they were not going to have the tablet working for 2.8, but for 3.0, because of GTK issue. You can use the pen like a mouse, but there is no pressure, so it's useless.. :/ Since there is no tablet support in 2.8 linux, I'll be stuck on 2.6.11. :(

So, where is all the new features? I'm using 2.7.3, right now, and it looks mostly like the same old Gimp. Where are all the layer effects and such that was promised with the new compositing framework? All I've found to be significantly different is the new single window mode. It took this long to deliver pretty much the same thing we already had? I'm failing to see the progress, unless it's all underneath, and new features to be built upon the improvements are yet to be developed.

Tablet is working with 2.7.3 already I am currently using it. I did not understand why you are cmplaining about it? Am I missing something? However, I could not personalize the brush pressure etc. May be I did not understand how I can. There are a few modes which are offered but they do not offer what I need.

Also, there is a serious bug with txt tool! It needs to be fixed for sure...

But I am grateful for this software, it is excellent :)

oh, thats great news, photocomix. i missed that... thanks for the info!

if you don't believe you may try..if you use Windows you may get the installer here
http://www.gimpchat.com/viewtopic.php?f=7&t=3180

It is a pity that the 2.8 release date once more has been changed. I have been waiting for a long time to change over to the Gimp for my introduction to digital image manipulation course (university) but have had to use proprietary software. Now it looks like we will not be able to make use of 2.8 by the start of Semester 1, 2012. I agree with Sol that it is pointless to try and follow what Photoshop is doing. Make the frequently used tools as bug-free as possible and consult with the users what they REALLY want/use. Adobe is like Microsoft - they keep thinking that as long as you give more people will upgrade; I for one am tired of getting more and more bloated software for more and more money (ref. Adobe's new upgrade policy).

I'm so disappointed with 2.8 release.. Since it has a broken tablet support, it's useless for professional work! :( I wish the development would focus on improving existing tools, like better text rendering, procedural brushes, instead of creating new tools, which make the software more bloated.. Photoshop HAS to offer something new, it's how they make money, GIMP doesn't. Photoshop failure will be its bloat, no point paying for a bunch of useless tools. (tools that adobe makes you feel like you need them, but you don't)